How Ukraine Blew Up a Key Russian Bridge


The successful attack was a critical moment in the war. It dealt an embarrassing blow to President Vladimir V. Putin of Russia, who presided over the bridge’s opening in 2018, and it underscored Russia’s inability to protect a critical strategic asset and a potent symbol as its only connection to Crimea.


Structural and explosive experts who reviewed the bridge’s design and imagery of the blast offered new details on how the bridge was damaged. The operation’s success shows sophisticated planning, they said — or luck. 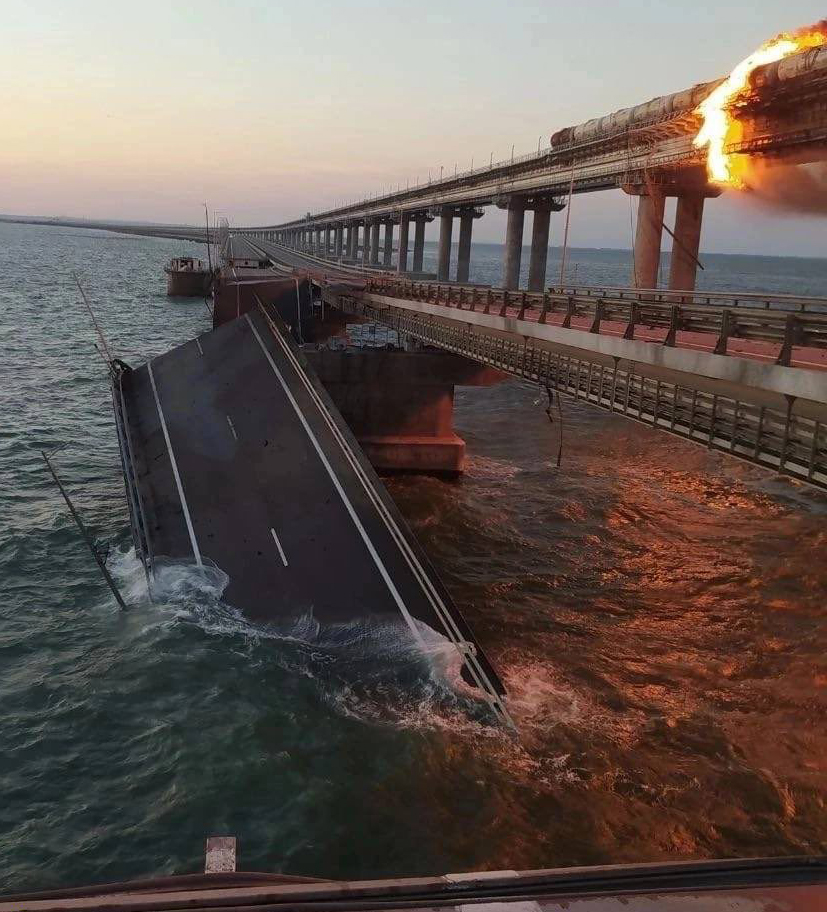 
There are few direct parallels to such a spectacular act of sabotage on a bridge behind enemy lines in wartime.


“Knocking down bridges was very difficult before the advent of precision-guided weapons, and even so, it is no easy feat,” said retired Rear Adm. Samuel J. Cox, the director of the Naval History and Heritage Command in Washington. “Given the historic difficulty, the damage to the Kerch bridge is quite impressive.”


Bridges are designed with more strength than they typically need so that they can withstand unexpected stresses, such as a weather event. Even a powerful blast may do minimal damage if it strikes in the wrong place.


The Kerch Strait Bridge is no exception, and there is nothing unusual about its design: about 11 miles long, the roadway is held up by long steel girders resting on reinforced concrete piers, sunk into the sea floor. A raised portion, known as a tied-arch bridge, allows shipping traffic to pass underneath.


Despised by Ukrainians, the bridge opened in 2018 as a symbolic link to Russia after its occupation of Crimea. More recently, it has served as a crucial supply line for the Russian war effort.


By The New York Times. Satellite image by Maxar Technologies via Google, March 2020.


Experts who reviewed imagery of the blast agreed that the damage was most likely caused by a truck bomb, as Ukrainian officials have said, rather than a missile fired by a boat beneath the bridge, as some have suggested.


They also agreed that the position of the truck when it went off — between structural supports that could have lessened the damage — was crucial to bringing down the span that held up the roadbed between those two supports.


“A lot of things had to work perfectly for this to happen,” said Vijay K. Saraf, a principal engineer at Exponent.


The blast ignited a train carrying large fuel tanks on an adjacent bridge, creating flames and a plume of smoke. And on the roadbed, the damage was not confined to the span between the supports: seemingly with the precision of a demolition charge, the blast was also perfectly placed to sever or destroy some 900 feet of continuous roadway on the Russia-bound side of one of the long, lower sections of the bridge.


But the experts differed on whether the sequence indicated a sophisticated plan.


It was possible that planners of the attack hoped the fuel tanks would explode and inflict major damage on the railway bridge, said Adam Evans, a structural engineer at Wiss, Janney, Elstner Associates. But he said it was unlikely that the explosion was intentionally timed at a sweet spot to cause damage to the roadway.


“I would be hard-pressed to believe that,” Mr. Evans said. “I think it’s probably more like, ‘We’ll drive a bomb over this bridge and we’ll cause a lot of damage.’ ”


In fact, several engineers said, the damage from the explosion might have been greater if the bomb had gone off a minute or two later. The truck had already started up the incline to the large, raised section of the bridge held up by a set of soaring steel arches.

By Nailah Morgan and Sarah Kerr


A large enough blast there might have been able to damage the arches and disable the entire roadway bridge, engineers say.


“It almost seems as if this was a mistake that it blew up where it did,” said Shankar Nair, a structural engineer based in Chicago with more than 50 years of experience designing bridges.


That raises questions about how the explosion was timed and whether the driver of the truck knew about the bomb.A remote detonation could be difficult to time precisely. But a suicide bomber might have been expected to hold off until the truck made it to the arched span, Mr. Nair said. A direct hit to the arch, with its enormous amount of steel, could have taken far longer to repair, he said.


“If it were a suicide truck bomb,” Mr. Nair said, “I would think the guy would have destroyed the main span.”


But the trigger for the bomb is still unknown. Suicide bombers often behave erratically, and it is unclear if the truck bomb that was used was large enough to take down the arched section of the bridge.


Russia quickly restored rail and road traffic on some parts of the bridge, but restoring full capacity could stretch well into next year. A satellite image taken last week by Planet indicated that a large section of the roadway was still missing. And the British Ministry of Defense, citing Russian statements, said on Wednesday that road traffic could be disrupted until March 2023, and rail traffic until as long as September 2023.


Regardless of how long the bridge is damaged, the attack succeeded in giving a symbolic victory to the Ukrainians and an embarrassing blow to the Kremlin, which had lost momentum in the war.


Rough estimates based on the size of the fireball indicate that there was a large quantity of explosives in the truck — at least a few tons, depending on the type of explosive, said Nick Glumac, an engineering professor at the University of Illinois at Urbana-Champaign. Other blast experts said that a smaller charge, of a ton or less, might have been sufficient.


When the bomb went off, the downward force of the blast put tremendous pressure on the bridge’s girders, the steel beams that hold up the roadway. The blast was perfectly placed in the middle of a span, where it is most prone to flex under pressure, making the beams especially vulnerable.


Some images of the wreckage suggest that the truck exploded directly over one of those beams, which could also have ripped away part of the steel. They gave way, and the span buckled.


But the damage was far more extensive than that one spot. That’s because the roadway underneath the bomb was a continuous structure over five of the piers, covering about 900 feet, according to engineers.


The span overwhelmed by the explosion happened to be near the center of that stretch of road. When the span fell, it pulled the road toward it in both directions. The free ends of the road at the joints on either side slid off the piers on which they rested and fell toward the water.

Apple Silicon made in America – explaining the conflicting reports

Apple Silicon made in America – explaining the conflicting reports