These adorable Australian spike-balls beat the heat with snot bubbles 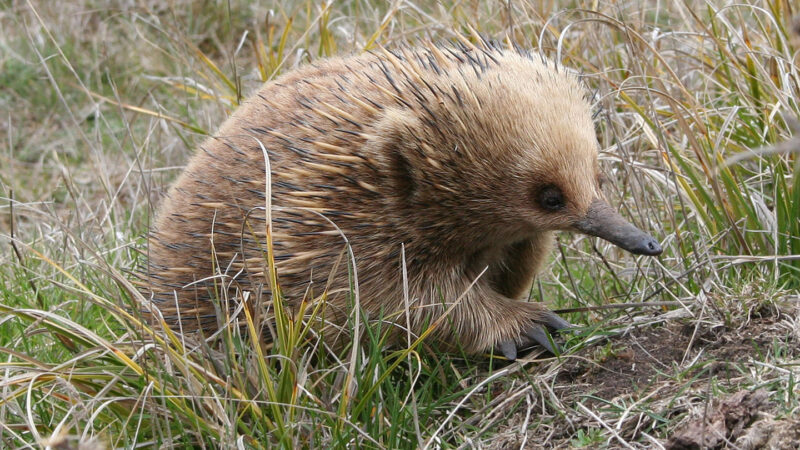 Animals cover themselves in all kinds of unsavory fluids to keep cool. Humans sweat, kangaroos spit and some birds will urinate on themselves to survive hot days. It turns out that echidnas do something much cuter — though perhaps just as sticky (and slightly icky) — to beat the heat.

The spiny insectivores stay cool by blowing snot bubbles, researchers report January 18 in Biology Letters. The bubbles pop, keeping the critters’ noses moist. As it evaporates, this moisture draws heat away from a blood-filled sinus in the echidna’s beak, helping to cool the animal’s blood.

Science News headlines, in your inbox

Headlines and summaries of the latest Science News articles, delivered to your email inbox every Thursday.

Thank you for signing up!

There was a problem signing you up.

Short-beaked echidnas (Tachyglossus aculeatus) look a bit like hedgehogs but are really monotremes — egg-laying mammals unique to Australia and New Guinea (SN: 11/18/16). Previous lab studies showed that temperatures above 35° Celsius (95° Fahrenheit) should kill echidnas. But echidnas don’t seem to have gotten the memo. They live everywhere from tropical rainforests to deserts to snow-capped peaks, leaving scientists with a physiological puzzle.

Mammals evaporate water to keep cool when temperatures climb above their body temperatures, says environmental physiologist Christine Cooper of Curtin University in Perth, Australia. “Lots of mammals do that by either licking, sweating or panting,” she says. “Echidnas weren’t believed to be able to do that.” But it’s known that the critters blow snot bubbles when it gets hot.

So, armed with a heat-vision camera and a telephoto lens, Cooper and environmental physiologist Philip Withers of the University of Western Australia in Perth drove through nature reserves in Western Australia once a month for a year to film echidnas.

In infrared, the warmest parts of the echidnas’ spiny bodies glowed in oranges, yellows and whites. But the video revealed that the tips of their noses were dark purple blobs, kept cool as moisture from their snot bubbles evaporated. Echidnas might also lose heat through their bellies and legs, the researchers report, while their spikes could act as an insulator.

“Finding a way of doing this work in the field is pretty exciting,” says physiological ecologist Stewart Nicol of the University of Tasmania in Hobart, Australia, who was not involved in the study. “You can understand animals and see how they’re responding to their normal environment.” The next step, he says, is to quantify how much heat echidnas really lose through their noses and other body parts.

Monotremes parted evolutionary ways with other mammals between 250 million and 160 million years ago as the supercontinent Pangaea broke apart (SN: 3/8/15). So “they have a whole lot of traits that are considered to be primitive,” Cooper says. “Understanding how they might thermoregulate can give us some ideas about how thermal regulation … might have evolved in mammals.”

How Medical Technocracy Made the Plandemic Possible

Census in India: Baffling lack of data is hurting Indians

Census in India: Baffling lack of data is hurting Indians