Astronomers Have Detected a ‘Missing Link’ Shockwave in Merging Galaxies

The colossal shock wave generated by the first stages of a collision between some of the most massive structures in the Universe has just been seen and imaged for the first time.

The detection was found in the galaxy cluster Abell 98, which is a large structure made up of three smaller sub-clusters of galaxies located more than 1.2 billion light-years from the Solar System.

There, a huge filament of gas contains the enormous shock along the merger axis that has been theoretically predicted to be the first ‘contact’ between two sub-clusters of galaxies as they start to merge.

“With this discovery, we caught two sub-clusters of a galaxy cluster in a crucial early epoch of the merging process, with a strong shock between them, providing a missing link to the formation of the most massive structures in our Universe,” said physicist and astronomer Arnab Sarkar of the University of Kentucky. 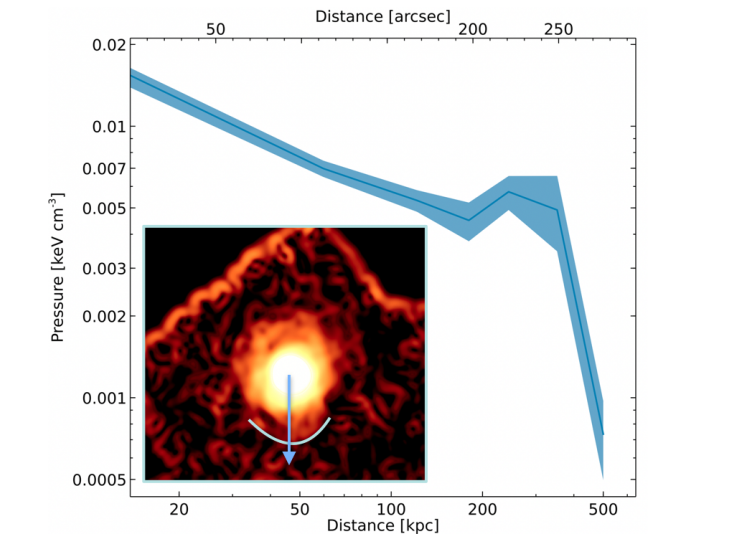 Pressure measurement across the shockwave in Abel 98. (Arnab Sarkar)

The Universe is constantly in the process of interacting with and arranging itself. Galaxies aren’t isolated entities drifting through space; gravity is everywhere, and the constant push-pull and interplay results in clusters and superclusters and megaclusters and filaments, dancing around each other and forming larger and ever larger structures.

These interactions aren’t occurring, of course, on anything remotely approaching human timescales; but, by observing clusters at different stages of merging, astronomers can reconstruct how these collisions take place.

Within clusters of galaxies, as you can imagine, the gravitational environment is pretty intense, with sub-clusters merging to form larger structures within the overall cluster.

In 2014, astronomers noted that two sub-clusters within Abell 98 – named A98N and A98S – appeared to be merging, as evidenced by brightness and temperature signatures in A98N consistent with a merger shock between the two.

Sarkar and his team, who presented their findings at the 240th meeting of the American Astronomical Society, took a closer look at the region between the two sub-clusters using the Earth-orbiting Chandra X-ray Observatory. There, they found what they describe as “definitive evidence” of a shock edge to the south of A98N.

This, they say, is a huge deal. Although inter- and intra- cluster mergers must be fairly common (because, well, the Universe is full of galaxy clusters) catching one in its early stages is pretty rare. We see a lot in the later stages, including the shock waves generated by these extreme interactions, but very few as the clusters draw together.

That may be because they’re harder to spot, but the detection made by Sarkar and his colleagues may inform future searches by providing some information about what to look for. And, of course, it fills in some of the crucial gaps in our understanding of how cluster mergers take place, and evolve. That means we’ll be able to make better predictions about the evolution of galaxy clusters.

“This result is important because diﬀerent computer simulations seem to be telling us diﬀerent things about what we should observe early on in a galaxy cluster merger,” Sarkar said. “Here, we have a picture of what this process actually looks like, and that can be used to inform our theoretical models.”

The team’s research was presented at the 240th meeting of the American Astronomical Society. A paper describing the findings has been submitted to The Astrophysical Journal, and is available on arXiv.

UK scaleups should HMRC-proof their business plans before a slow, hot summer – TechCrunch