I Went Camping For a Week — By Myself 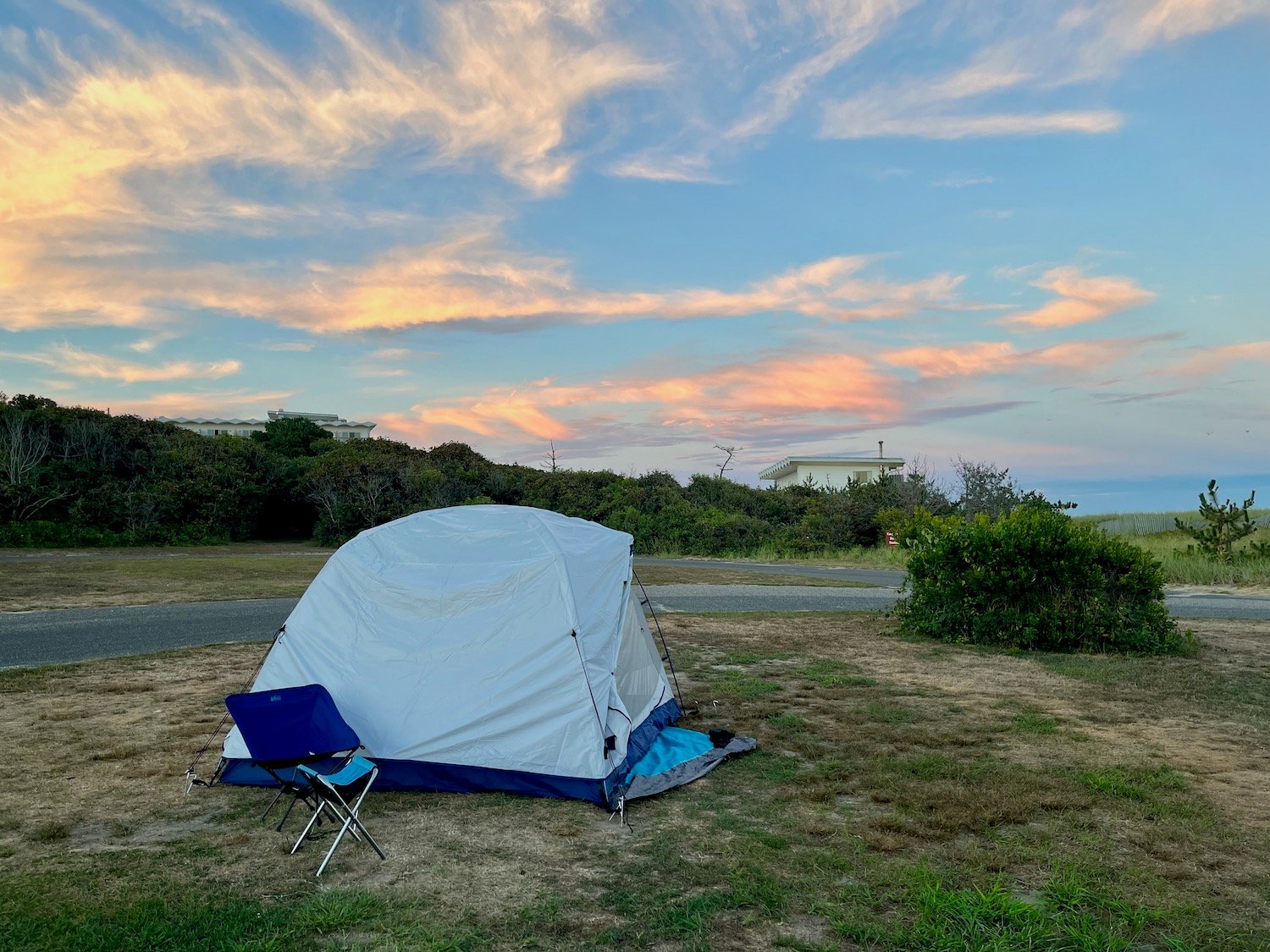 In spring 2021, my cousins, aunt, and uncle invited me to go whitewater rafting for a week on the Salmon River in Idaho. I hemmed and hawed. I love those guys, but I’m not the most outdoorsy person and, as I expressed on the phone, “I would like to avoid dying this summer.” They promised I wouldn’t die and so I hesitantly agreed. As everyone has been saying forever, spending time in nature was fun and deeply restful. Plus, I lived. (A giant tree did fall at one of our campsites, but the only casualty was an omelet that had a little bit of bark in it.) I promised myself I would do some sort of camping again soon.

Back at home, I gave myself a one-year deadline to get back out there. My boyfriend and I snagged a weeklong camping spot for August 2022, but after he herniated a disc in his neck and realized he couldn’t come, I surprised myself by saying, “Maybe I’ll just go by myself.” Friends and family were both startled and extremely encouraging. One friend sent me a photo of an ’80s issue of Outside Magazine with Fran Lebowitz on the cover. “Why We Camp: Fran Lebowitz Wants to Know” read the headline. She looked skeptical, posing in front of a tent in blue jeans and camel-color coat, her arm resting on a leather suitcase.

As my departure date grew closer, I practiced setting up my tent in our Brooklyn living room, where it took up almost every inch of floor space. I crawled in. It was enormous for one but also cozy. 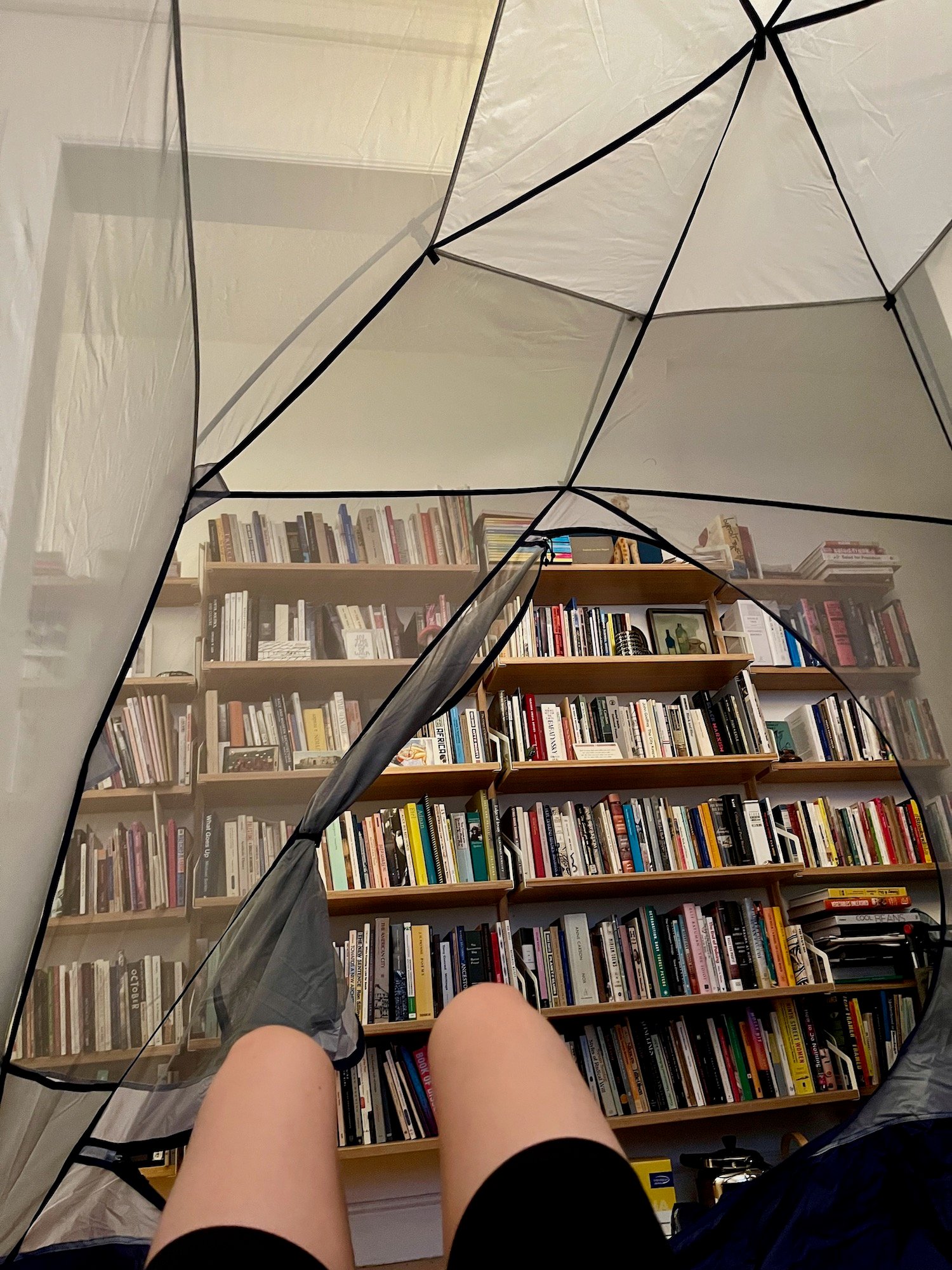 I’d be camping by the beach on Long Island, which felt less scary than sleeping in the woods assuming every rustle of leaves was a bear or serial killer. During my three-hour drive from Brooklyn, I stopped for a lobster roll at a roadside restaurant and felt like a total genius for booking myself seven uninterrupted days at the beach with a giant stack of books.

Things took a slight turn when I arrived. The campground had 190 campsites — the size surprised me — so my first view was of a rather large parking lot. As I walked up to the check-in cabin, I was distracted by a payphone on the porch. I eyed it warily as I pulled out my phone and discovered that I didn’t have a single bar of service. “Is there no cell service here?” I asked the receptionist.

“Not really, but some people find if they stand under the flagpole they can maybe get a call to go through,” she told me. As someone who has a *complicated* attachment to my phone, this was not great news.

But I soldiered on to my little campsite, where I could hear waves just over the dune. Weirdly, there was no one standing guard with a stopwatch to make fun of me if it took longer than two minutes to set up my tent. (I did it in four, but had a hard time getting the stakes to stay in the hard, sandy soil and hadn’t thought to bring a hammer.) 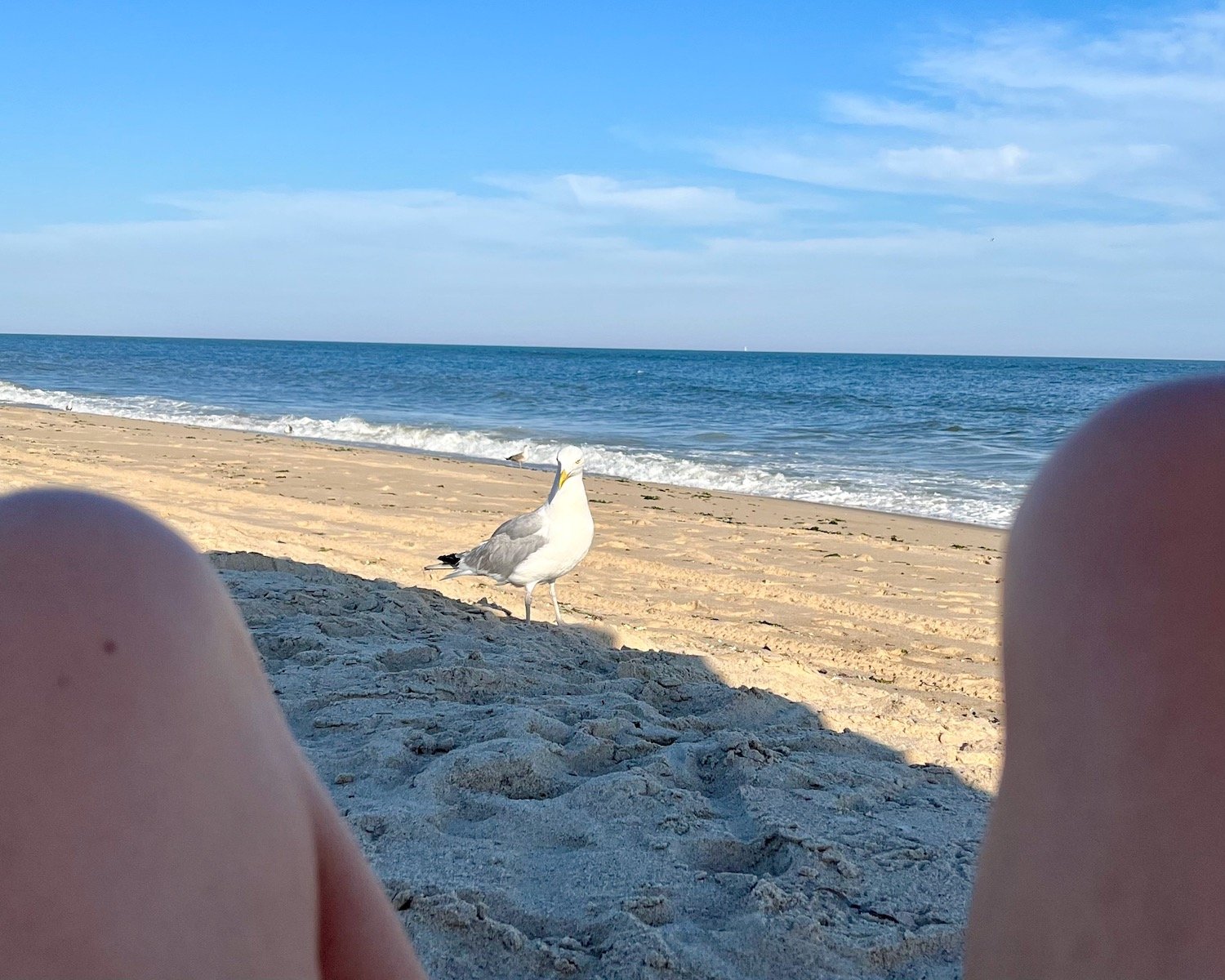 A walk on the beach revealed that there was precious cell service near the ocean. (Yes, I was checking just about everywhere.) I sent a proof-of-life text to my boyfriend while looking for sea glass. I thought I’d overpacked, but as I strolled around the campsite, I noticed people had screened tent rooms and even inflatable sectionals. Next to some RVs, it looked like a suburban garage had vomited all forms of transport onto the grass, including bikes, roller blades, skateboards, and even a pogo stick. My tent/chair/cooler/beach umbrella combo felt positively minimalist.

That first night, I brushed my teeth at 8 p.m. and crawled into my tent to read with a headlamp. I could hear the surf and my neighbor’s RV generator. Then a few kids on scooters and bikes rode past and one said, “This end of the campground is where all the baddies are.” I smirked in my tent and fell asleep before midnight. 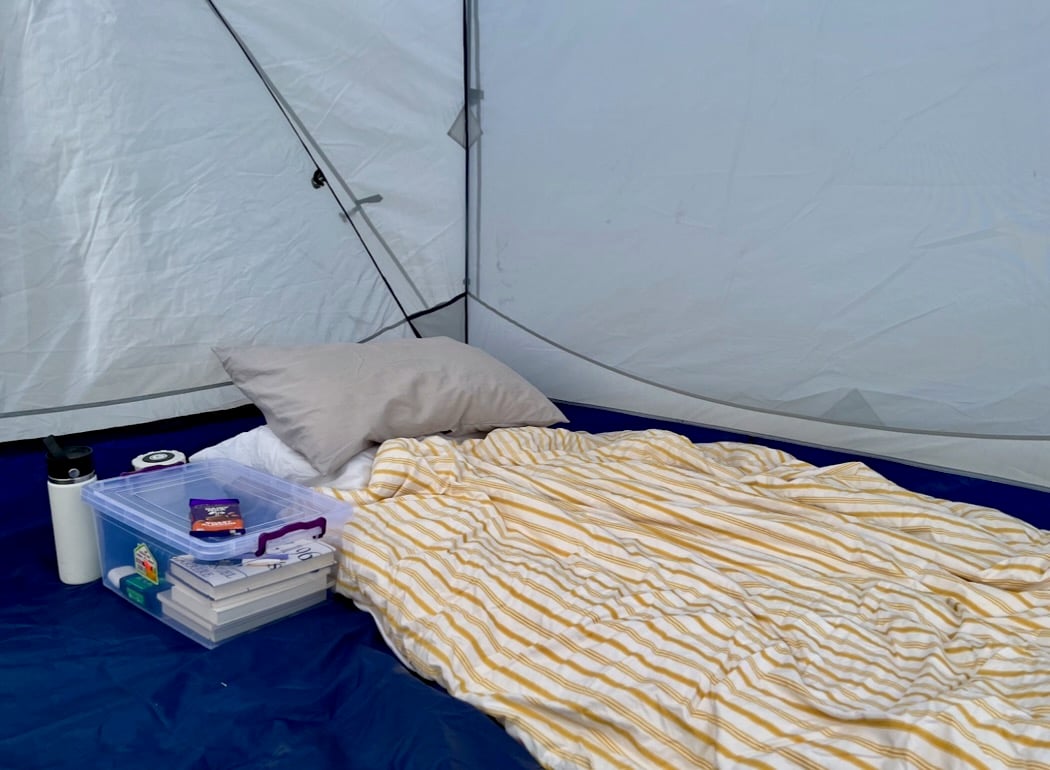 I woke up boiling. As it turns out, sleeping in a plastic dome is equivalent to snoozing in a microwave, minus the rotating aspect. I ate breakfast and stumbled out to the beach. A crowd of people were staring at the water, and soon I saw the whale, too. I’d see several over the coming days and never got over the excitement of seeing a creature that huge eating breakfast so close to shore.

I was enjoying the wildlife, but missing human contact. As soon as I had cell service again, I texted one of my aforementioned cousins. She’d spent a month hiking the Pacific Crest Trail alone, but when I asked for advice — “When you were on the PCT what did you think about?! I feel like I’ve run out of thoughts and it’s been less than 24 hours!!” — she was not very helpful. “IDK, I just walked,” she wrote back.

That afternoon, my friends texted to see what I was up to. “I have spent my time whale watching (!!), taking pictures of my cabbage slides in various locales, walking on the beach, thinking about my next meal, buying ice for my cooler at the park’s convenience store, eavesdropping, and doing a bit of writing. I woke up at an ungodly hour (7 a.m.) because of the sun so it already feels like late afternoon.” (It was 11:43 a.m.) 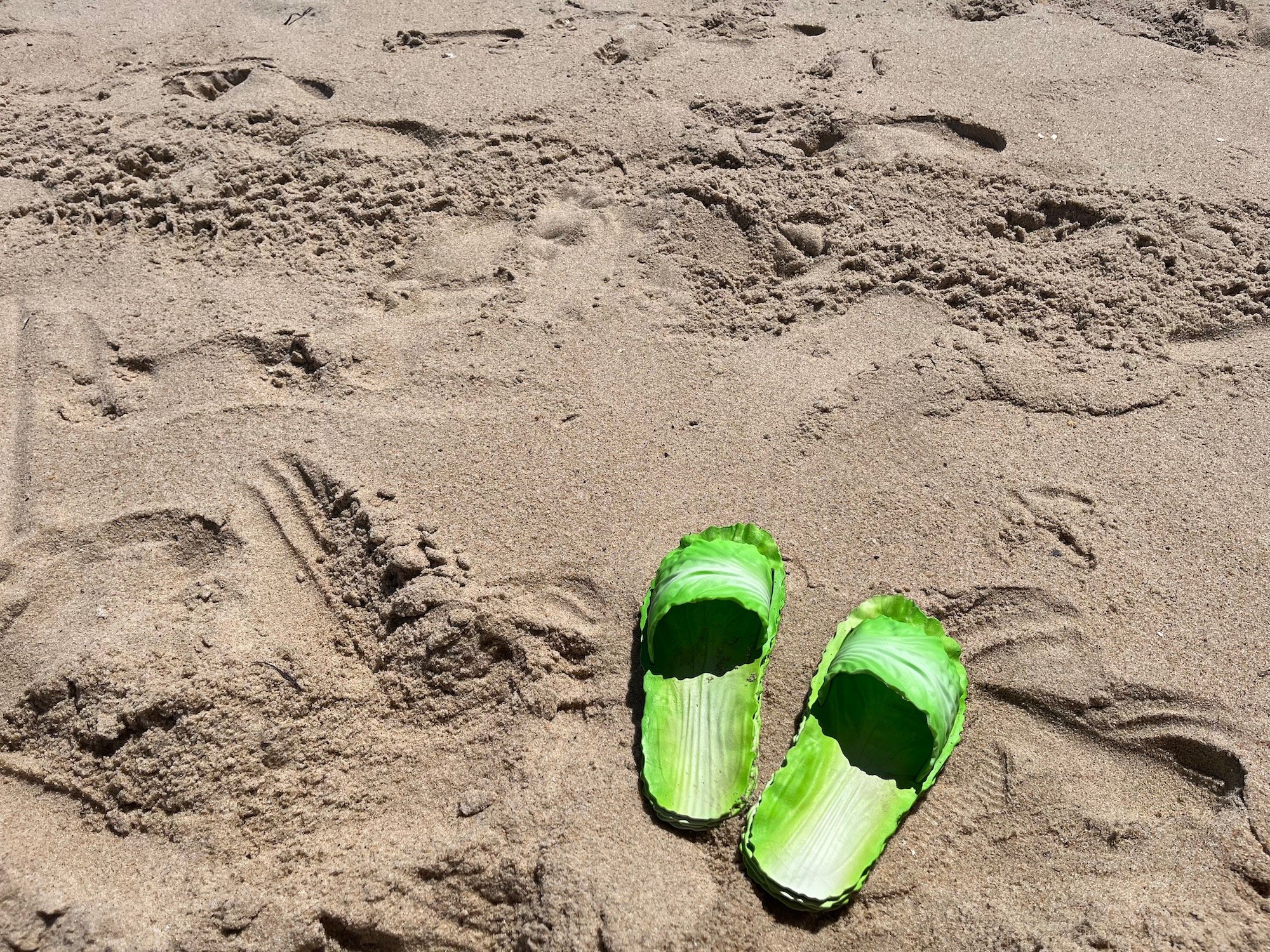 I put myself in charge of two meals a day and had the third in nearby towns, thanks to my trusty Volvo. I bought produce from farm stands, climbed to the top of a lighthouse, picked out which beachfront house I’d live in if given the option, and noted funny signs on walks and drives (“Screen repair. We fix what bugs you.”)

In the car, driving to get dinner one night, I turned the dial to talk radio, thinking it might be nice to have a bit of company, but the hosts were just asking people to call in and explain where they had mosquito bites. I had better luck chatting with friendly local fishermen. “What’re you trying to catch?” is a very successful opener. Bluefish and striped bass came the answer. 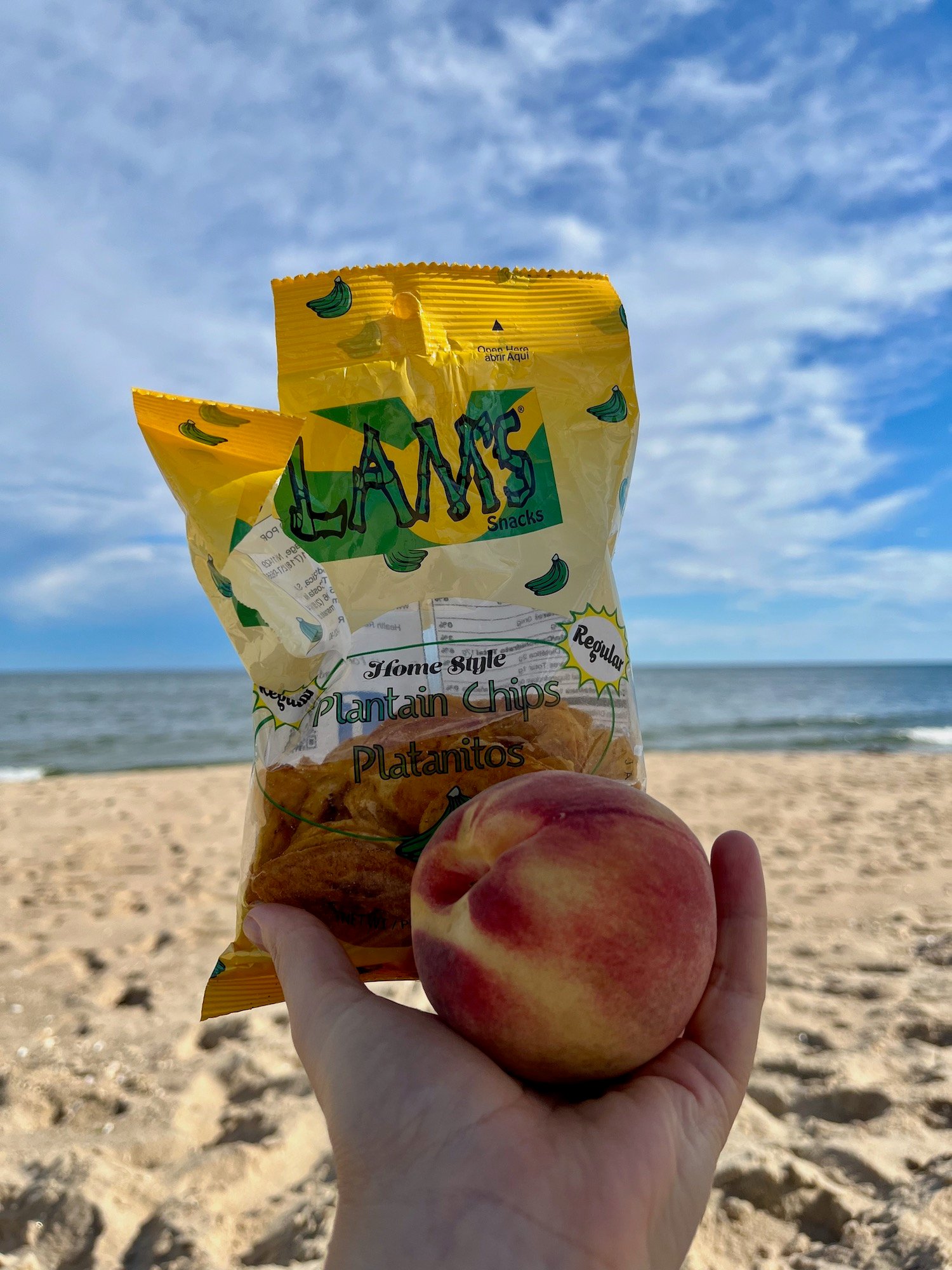 On the fourth day, my somewhat frantic energy finally gave way to a level of chill I don’t normally experience. I spend plenty of time alone in my normal life, but not without much to do beyond go for a long beach walk or read for two hours while assessing whether the wind is strong enough to send my beach umbrella flying.

Evenings were my favorite: the smell of the wind, the moon rising through the wall of my tent, getting to see the Milky Way. The days were sort of boring, but in a nice way. Ah, yes, time to take 500 pictures of the sunset. “You must read a lot, you have a different book each day,” the woman camping next to me with her husband and daughter said, then quickly added, “Not that we’re spying on you! Just noticing.” (I did read several.)

One night, my neighbors invited me to join them for s’mores. To be honest, I don’t think s’mores are that great, but I appreciated the company. Surrounded by so many families and friend groups, I couldn’t help feeling like an outsider. So, it was heartening when my neighbor called me a good role model and said she was glad her daughter was seeing me camping by myself. 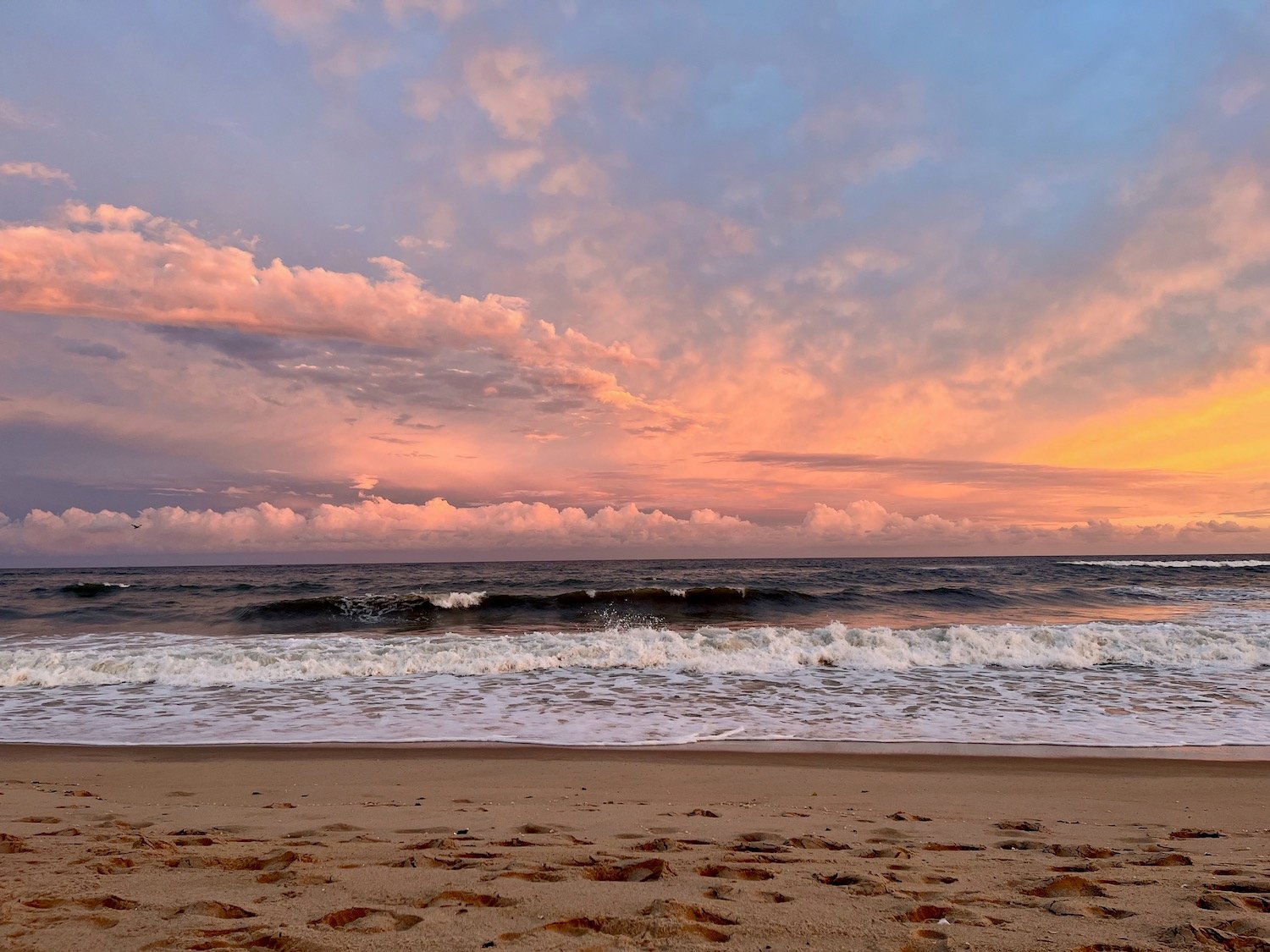 Though car camping is beginner stuff and lots of people camp solo, I felt proud driving back into the city after my adventure. So, that’s camping, I thought as I pulled into a parking spot near my apartment building, feeling giddy from the accomplishment and mentally checking off a big box. This city mouse spent a week in a tent!

At home, I was curious about how Fran Lebowitz’s 1983 camping adventure had gone. I’d only seen her Outside cover, but sure enough, someone had found the back issue and posted the full story on Twitter.

Fran had company and went for just a night, but after a steak dinner over a campfire, when her fellow campers revealed it was only 7:30 p.m., she was pretty much ready to be done. I recognized the way I’d felt my first few nights, when time seemed to move extra slowly:

Instead they looked at a foxhole, Fran asked what she should take off before sleeping (shoes, was the advice), and got a headache from “all this fresh air.” Though she famously doesn’t have a computer or cell phone, I was able to get a question to her. “You didn’t seem too taken with the whole sleeping in a tent thing,” I wrote, referencing her past trip. “I’m curious, have you ever gone camping since then or do you still consider the outdoors ‘a place you must pass through in order to get from your apartment into a taxicab’?”

A few weeks later, an answer from Fran came back: “No, I haven’t camped since then. I’d have to be sentenced to it.” Meanwhile, I was already thinking about my next trip.

Alex Ronan is a writer and investigative reporter from New York. Her work has been published by Elle, New York Magazine, Vogue, and The New York Times. She has also written for Cup of Jo about single moms, sibling loss, parenting abroad, and nude lipstick. Follow her on Instagram or Twitter, if you’d like.

P.S. 5 tips for hiking with kids, a polar explorer’s beauty uniform, and an outdoorsiness scale lol. Plus, 12 readers share their solo travel photos.